"I Wanna Be a Billionaire"...really Travie? 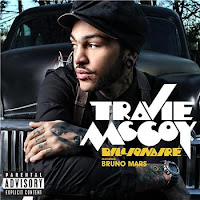 Billionaire Lyrics:
I wanna be a billionaire so fricking bad
Buy all of the things I never had
Uh, I wanna be on the cover of Forbes magazine
Smiling next to Oprah and the Queen

The song is a little laughable, I admit. I mean, Travie, you're probably a millionaire, but you're not satisfied yet? Although none of us feel directly like we can relate to poor Travie's situation, I know I'm tempted to feel similarly. When it comes to money, it's easy to feel like I never have enough.

When I graduated from college I was about 18k in debt and it was my goal to get out the first year. But, I decided to move out instead and 2 years later I'm only 5k in, but I was still stressin'. I used to dream about what it would be like to not owe anyone a penny: I would be financially free! Somewhere along the line I realized that once I paid off college, I would feel burdened by saving enough for a house. Then feel buried in debt when I finally bought one. Then there's always starting the family...I mean, this money thing isn't about to end. I'm only at the beginning.

Finally I realized that there will always be money or lack thereof to obsess about if I allow myself. Even though I pride myself on a having at thrifting lifestyle, I don't want to let money ever consume me. Sure, I want to pay less for things and I almost always do and always will but it's important for me to feel satisfied with what I have, whether I'm in debt, at zero or maybe even carrying some dollar dollar bills ya'll. Money won't satisfy, in fact it only seems to create a need for more.

Upcoming Post: Back to School - How to Save Serious Cash on Textbooks
Posted by Angela at 8/19/2010