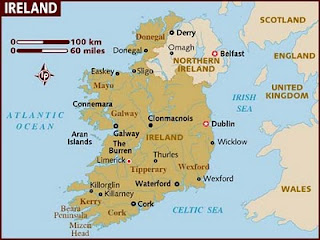 I am fortunate enough to be in Galway, Ireland and will be taking a Europe tour for the next couple weeks. You might be thinking, well that doesn't sound very thrifty of you, does it? Well, you gotta spend that stale cash somehow and I usually choose travel. I feel like if you haven't seen the world before you die, then you haven't fully seen the human experience. Thus far in my life I have been to Canada & Mexico, Egypt and Spain. After this trip, I add Ireland, England, Whales and France to that list. Eventually I'd really like to go to some part of Asia, Australia/New Zealand. Back in the U.S., I'd love to go to Oregon, Washington and Alaska. One day I'll get there, if I save enough cash.

Still in Ireland I've thus far made two attempts at being thrifty, cause this place is expensive. I'm one for two.

1) First story: we get to the JFK airport and everyone on my trip decides they will buy Euros in the airport. Before the trip, I read up on the euro/dollar trading. I knew I should get about $0.75-79 per U.S. dollar. I saw that JFK was offering a mere $0.66 cents with a $10 fee if the transaction was under $500. I was appalled at the prices and decided to take a chance. I had no idea what I would get in the Ireland airport, it might be better or it might be worse. Members of my crew advised me to trade $20 just so I had something in case of emergency, but I didn't because of the $10 fee per transaction...I'd be paying $30 U.S. and really getting $20 towards the Euro. There's no way that was happening.

When we get to Ireland, I head straight for the euro/dollar trade airport woman and try to decipher the numbers on the large scrolling board. Finally, I just asked the woman what a U.S. dollar would get me and she said $0.72! But then after their 3% transaction fee, it was really $0.69. Though $0.03 doesn't sound like a lot, since I was only trading $400 I would have eaten the $10 fee and paid $12 more for my money equally a savings of $22. Not too shabby. Thrift success! 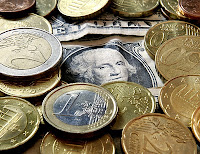 For future reference, I did some additional research and found it is best to do your exchanging at your local bank or post office to get the best rate. Either way, I would advise to shop around.

2) Next, yesterday I urged my group to head to the grocery store so we could pick up some necessary items including bottled water, snacks and whatever else. I decided to grab a couple grocery-store made soups and put them in fridge in the hostel as to avoid eating out for every meal. They have community fridges at the hostel so you can label your stuff and stick it in, obviously taking a risk. This morning I went to grab my cheaper lunch from the fridge and my soups were gone!! Which means either I labeled them incorrectly and they got thrown out, or people stole them. It was a little heartbreaking - 6 euro down the tube. But alas, they did not eat my yogurt, so I am enjoying a little parfait instead of going out for an expensively delicious pub lunch (though I asked someone to pick me up a chicken sandwich from a fast food joint (still much cheaper) because we might be hiking today and I need something substantial!

During my trip, my blogs will most likely be limited but I will attempt to give a couple updates as I am able. Hope everyone is doing well in the U.S.!
Posted by Angela at 1/01/2011